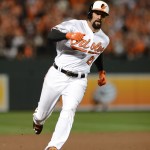 Nick Markakis return to Orioles becoming increasingly uncertain On the same day the Orioles lost Nelson Cruz to the Mariners, it looks like an unwilligness to guarantee long-term security to outfielder Nick Markakis might lead to his departure from Baltimore. Cruz signed a reported four-year, $57 million deal with Seattle on Monday and Dan Connolly of The Baltimore Sun writes that Markakis' … END_OF_DOCUMENT_TOKEN_TO_BE_REPLACED

Jon Lester free agency decision looms as Braves don't make offer Jon Lester continues to make his way through free agency and he has one less offer to consider before making his decision. The Braves were expected to be in the hunt for his signature, hoping that Lester making his offseason home near Atlanta might help their courtship. But according to David O'Brien of the Atlanta … END_OF_DOCUMENT_TOKEN_TO_BE_REPLACED