Dale Scott, a Major League Baseball umpire for 29 seasons, has come out as gay, making him the first active male official to do so in the U.S.’s four major sports.

In contrast to the high-profile coming out stories of Michael Sam and Jason Collins, Scott’s decision happened quietly.

In fact, he technically came out two months ago, in a subscription-only magazine that caters to the officiating industry. Scott’s story is spreading wider now after he spoke with Outsports about his time in MLB as a gay umpire and his decision to come out.

Scott was profiled in the October issue of Referee Magazine and when the magazine asked him for pictures from his personal life, that’s when Scott says he chose to submit a picture with his husband, Michael Rausch. The two of them have been a couple since 1986. They married last year.

Many people within baseball have known for years that Scott was gay — from his fellow umpires to players and bosses in the league office. It’s never been an issue, as far as Scott says. He’s worked three All-Star games, three World Series and numerous playoff games, including this year’s NLDS between the Dodgers and Cardinals.

When the Referee Magazine article was published, it was referred to Outsports by a minor-league umpire. That’s when Jim Buzinski of Outsports got in touch with Scott. While reluctant at first, Scott eventually agreed to speak with Buzinski as long as the interview would be published further into the offseason.

In one very articulate moment in the interview, Scott discussed his decision to come out:

“My thought process was,” Scott told Outsports in his first interview on the subject, “is that there’s a story about my career and how I got started in umpiring and they’re talking to people I have known since junior high and it didn’t seem right to have a whole story and pictures without a picture of Mike and I, someone who’s been with me through this entire process. We met the October after my first year in the big leagues.

“Obviously, when I sent that picture to Jeff, I knew exactly what it meant. In a small way, this was opening that door in a publication that wasn’t going to be circulated nationwide. It could be picked up, but it’s not Time magazine. I made that decision to go ahead and do it because I felt it was the right thing to do.

“I realized that it could open a Pandora’s Box, but this is not a surprise to Major League Baseball, the people I work for. It’s not a surprise to the umpire staff. Until Mike and I got married last November, he was my same-sex domestic partner and had his own MLB I.D. and was on my insurance policy.

“This is not going to be some huge flashing news to Park Avenue [MLB headquarters], but I also didn’t want to be making some coming out story, some banner headline, because that’s not how I operate. It’s not a shock to MLB management because they’re well aware of my situation and it’s not a shock to the umpire staff. If it would have been, I don’t think I would have done it.”

Later in the Outsports interview — the entire thing is worth a read — Scott said many of his fellow umpires have known he’s gay since the ’90s. He says he never issued a “coming out statement” to his circle of co-workers, many of them just figured it out, since umpires work so closely together during the season. 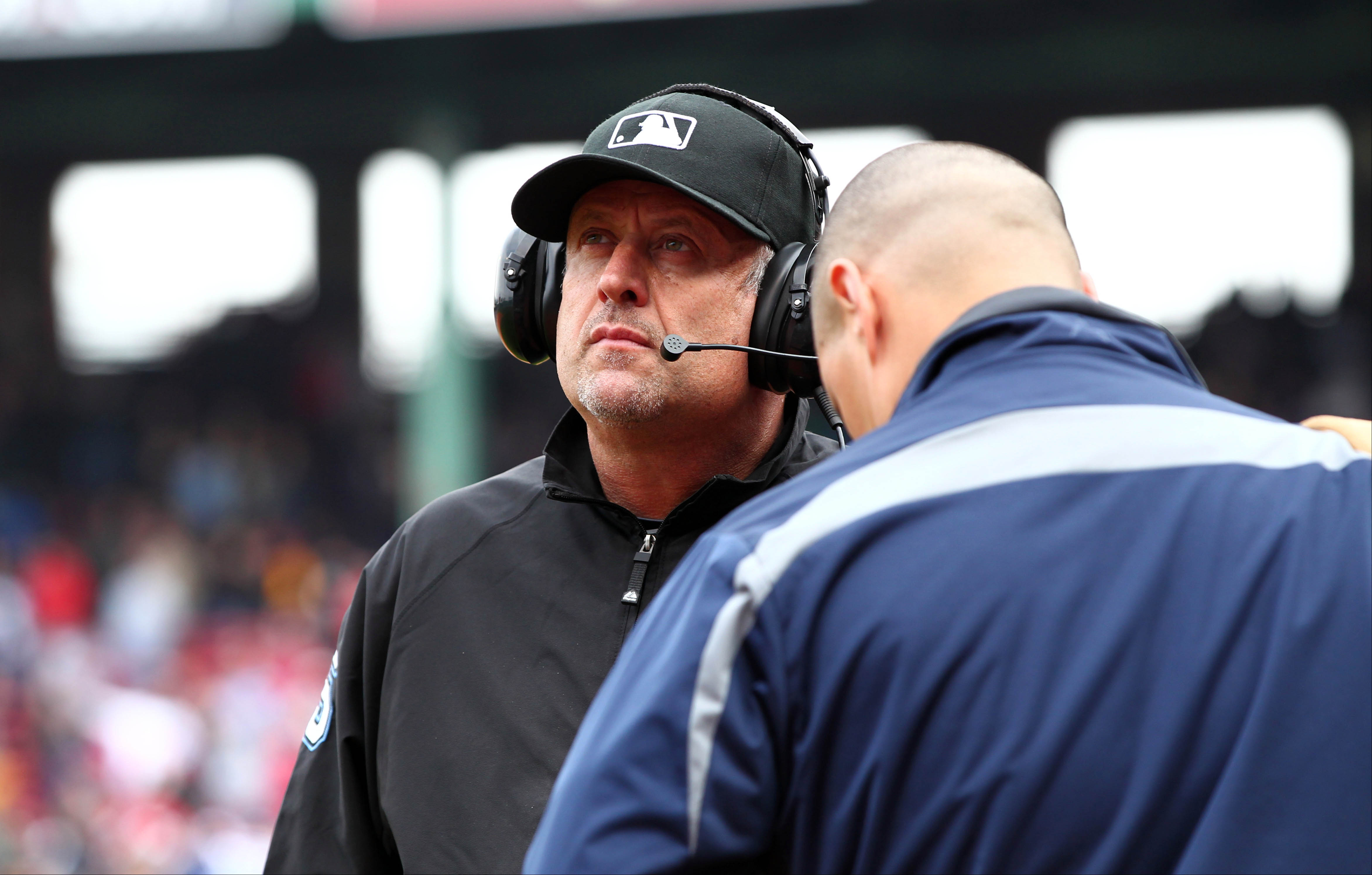 Likewise, Scott says MLB treated him like everyone else. He’s been judged by his calls on the field, and not his life off of it.

“I think Major League Baseball has proven that it certainly isn’t an issue with them. I’ve worked three World Series, I’ve worked the playoffs consistently, I’ve been a crew chief for 12 years. Obviously, if they had an issue with my life, it would be shown in my career with lack of assignments. I am extremely grateful that Major League Baseball has always judged me on my work and nothing else and that’s the way it should be.”

The reaction to the news of Scott’s coming out from the baseball world has varied. On one hand, you have Curt Schilling, a devout Christian, who you figure wouldn’t agree with Scott’s lifestyle. But this was Schilling’s reaction:

@outsports @BMcCarthy32 @MLB @SBNation Dale Scott might be one of the nicest guys I’ve ever met, and was a HELL of an umpire.

Then John Baker, a catcher for the Chicago Cubs, tweeted the following:

Much respect to MLB umpire #DaleScott congratulations on being able to be you!

Much like in any workplace, though, there are still people who are either uncomfortable with Scott’s sexuality or think it’s fodder for jokes. Consider this from Andy Martino of the New York Daily News:

Just asked 2 players if they’d known Dale Scott was gay. One said he didn’t, another said, “players have known for years.”

A recent former player on Dale Scott: “No one is dumb enough to…make a statement publicly that would get them in trouble.” BUT…

…”players have and will likely continue to snicker behind his back here and there.” A recent former player on Scott. Reality is complex.

Yes, the reality of sexuality in this country is still complex, though walls continue to be broken down. This is another one. Scott has to know that by coming out, he’s giving new fodder to unruly fans who love to taunt umpires.

After being an MLB umpire for 29 years, though, his skin is probably thick enough to handle it. He’s heard worse. It’s part of his job.