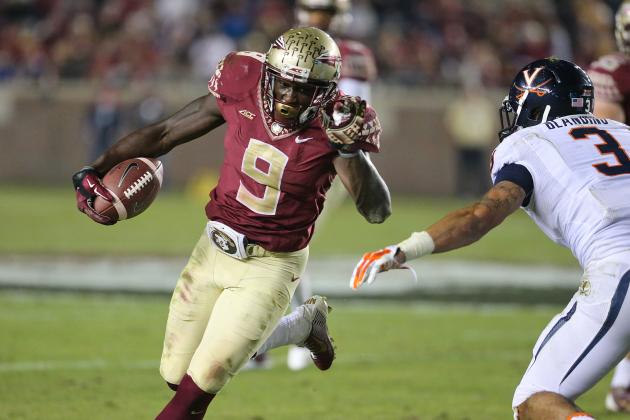 College football endured yet another wild weekend in Week 11, but it’s never too early to assess how all of the damage will impact the College Football Playoff standings entering Week 12.

The top three teams—Mississippi State, Florida State and Auburn—seemed to be leaps and bounds above their competition before this weekend, but not all of them stepped up to the task and brought home victory. A number of would-be contenders failed to take advantage of the opportunity to move up, while others seized the moment and are climbing.

Plenty has been shown to rank these teams based on what has unfolded on the gridiron this season, but it’s also worth noting what roads these squads have ahead. Certain teams have better opportunities than others to notch marquee wins before the season is done; that’s taken into account here.

With that in mind, here’s a fresh look at how the CFP field should look at the end of the season after Week 11. 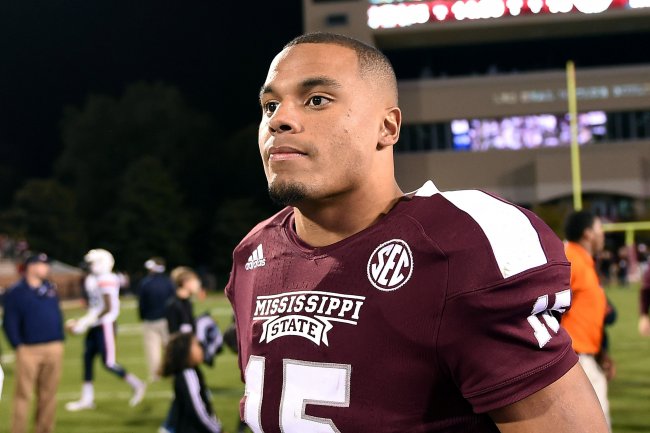 The Mississippi State Bulldogs continue to fly high atop the rankings, but a simple look at the remaining schedule has everyone around Starkville keeping the focus on the present rather than what could be.

Despite a 45-16 drubbing of Tennessee-Martin on Saturday, Dan Mullen’s squad was far from dominant. The FCS-dwelling Skyhawks notched more first downs than Mississippi State in the game, and the Bulldogs’ starters played well into the third quarter.

That doesn’t change the fact, however, that Mississippi State is 9-0 for the first time in its history and is entering a treacherous game against Alabama on the road.

The Bulldogs have quality wins against LSU, Texas A&M and Auburn, who were all in the top 10 at the time. That leaves the Miami Herald‘s Adam Beasley—and many others—believing Mississippi State would remain a top-four team even if it loses in Tuscaloosa:

If Mississippi State’s only loss is AT Alabama, it’s one of the four best teams in the nation.

Even if the Bulldogs’ unbeaten season ends at Alabama, they don’t have a magic carpet ride to the CFP. They will still have to play Ole Miss to end the season, and there’s nothing more the Rebels would love than to end their sweet-turned-sour season by dashing the title hopes of their archrival.

Mississippi State could very well lose to Alabama, miss out on the SEC title game and still inch into the CFP. It could also beat the Tide, lose to Ole Miss and rebound in the conference championship. Heck, the Bulldogs could enter the Egg Bowl undefeated and only to see losses to both the Rebels and Georgia or Missouri in the title game knock them from contention.

The simple wealth of possibilities should make any college football fan giddy to watch it all unfold. 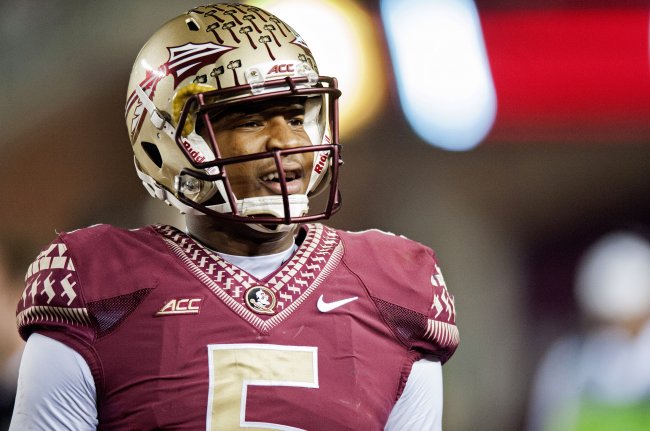 Florida State just sits and smiles at the giants that stand between Mississippi State and an undefeated record, because the Seminoles are in the midst of a cakewalk to the CFP.

The Seminoles’ toughest tests are behind them with wins in improbable situations against Clemson, Notre Dame and Louisville. Jameis Winston and Co. strolled past the first of four unranked foes left between them and the ACC title game, topping Virginia 34-20 at home Saturday.

That victory marked 25 straight for the ‘Noles, the first team to do so since Miami’s epic reign from 2000 to 2002. But those doubting Jimbo Fisher’s team got more fuel to add to the fire Saturday, when Notre Dame—whom Florida State very nearly lost to—lost by 24 to Arizona State, as ESPN’s Colin Cowherd noted:

Florida State struggled vs ND. Only struggle for ASU is scoreboard operator trying to keep up.

Haters will hate, but the reality is the Seminoles only need wins over Miami, Boston College, Florida and the ACC title game—probably Duke, again—to prove their worth in the CFP.

This team doesn’t blow out everyone it faces like last year but rather lets inferior teams hang around far too long. But the ‘Noles have a recipe for success, and there are few teams in the nation capable of stopping them.

And most of them will be Florida State’s company in the CFP. 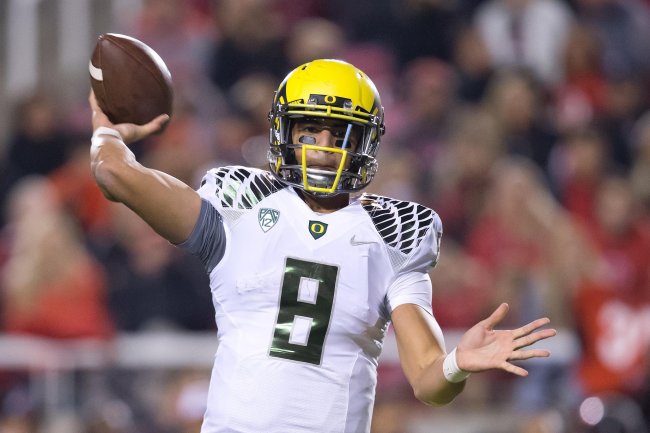 Utah’s Kaelin Clay was running into the end zone to give Utah a 14-0 second-quarter lead, and Oregon’s CFP chances looked very much in danger Saturday night. But he dropped the ball in play before celebrating, and Oregon returned it for a touchdown and a 14-point swing to tie it at 7-7. The Ducks never looked back, winning 51-27 against the No. 17 Utes.

Even without that magical momentum swing, though, Marcus Mariota was going to deliver the victory. He had 114 rushing yards and 239 passing yards, scoring four total touchdowns to add to his sterling Heisman Trophy campaign.

After a home slip-up to Arizona, the Ducks have been a wrecking ball in the Pac-12 with five straight wins by a combined 108 points. They have Colorado and a trip to Oregon State left on the schedule before a looming conference title game—likely against Arizona State.

With so much chaos in the SEC, the Big Ten playing itself out of contention and Florida State dominating the ACC, the Pac-12 is shaping up to be just how the CFP should be.

More than likely, Oregon and Arizona State will play in the Pac-12 title game. If both teams remain unscathed until then, the winner should absolutely be in the CFP. 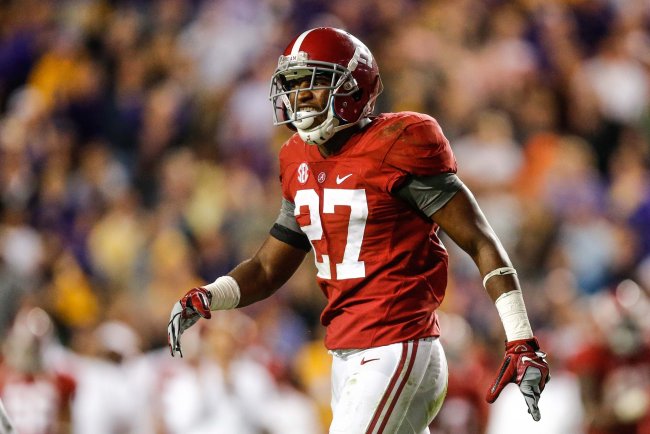 With less than a minute to go, Alabama’s national title hopes were on life support against LSU. Blake Sims magically led the Crimson Tide on a game-tying drive, then threw the eventual game-winning touchdown in overtime.

That was a major crisis averted for Alabama, and it finally has the marquee victory—a win on the road, at night in Death Valley, against surging No. 16 LSU—that critics claimed it lacked.

But just because the Crimson Tide are now worthy of a CFP spot doesn’t mean there’s not a ton of work left to do. Alabama faces both Mississippi State and Auburn before the season is done, although both are at home.

The ebbs and flows of the SEC this season have made unthinkable scenarios a reality, which Bleacher Report’s Marc Torrence captured best regarding the Tide:

“If we look ahead to Mississippi State, we could take LSU too lightly” is not something I anticipated Alabama fans saying before the season

TCU has a very strong case for the fourth and final spot after drubbing Kansas State on Saturday, and the Horned Frogs certainly have a better chance at winning out. But the Crimson Tide have much better chances to sway the committee with signature wins in these final few weeks, which will pay dividends.

If Alabama is able to beat both Mississippi State and Auburn, nobody will be debating whether the Crimson Tide deserve to be in or not.