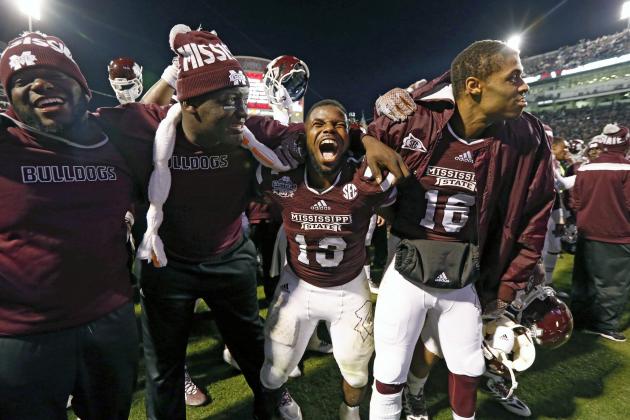 It has been just one week since the inaugural College Football Playoff rankings were released, and the Top Four has already changed.

Ole Miss’ heartbreaking loss at the hands of No. 3 Auburn dropped the Rebels out of the playoff picture, while Oregon comfortably took its spot with a shellacking of Stanford.

There will certainly be more movement at the top—perhaps as early as this week, with the Ducks facing a tricky road matchup at No. 17 Utah—and the newest rankings will soon be deemed irrelevant, but it’s fun to take a glimpse at what would happen if the regular season ended today.

That said, here are some predictions based solely on the second iteration of the College Football Playoff rankings.

No. 1 Mississippi State vs. No. 4 Oregon

I’m pretty sure neutral fans would be OK with this matchup coming to fruition. Dual-threat quarterbacks Dak Prescott and Marcus Mariota are two of the most thrilling players in America, and they sit at Nos. 1 and 2 on most Heisman Trophy lists.

So, yeah, I guess watching them go back and forth for a spot in the national championship would probably be all right.

Judging by recent play, you have to give the advantage in this one to the Ducks. Mississippi State struggled to put away Kentucky and needed a broken play to beat Arkansas at home, while the Ducks have averaged 47.75 points per game since a loss to Arizona a month ago.

That includes 45 against both a talented Washington squad and a normally extremely stout Stanford side, as Fox Sports’ Joel Klatt noted:

Stanford had not given up 30+ points since October of 2012 before #Oregon dropped 45 on them this weekend.

Oregon’s defense, which is 71st in the nation in yards per play allowed, is obviously concerning. But the Ducks would have little trouble scoring on the Bulldogs, who have given up 34 to UAB, 29 to LSU, 31 to Texas A&M and 31 to Kentucky.

In a shootout, I’ll put my trust in Mariota and his 26-to-2 touchdown-to-interception ratio. 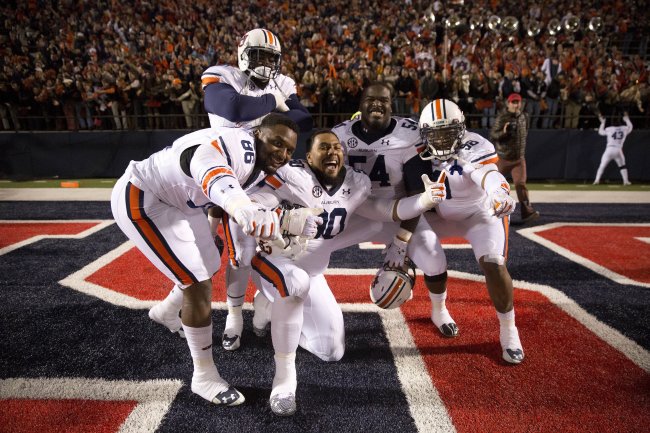 This playoff thing is pretty fun. First, we had a battle between the top two Heisman candidates. Now, we have a rematch of last year’s national championship, which happens to include the defending Heisman winner.

Should this matchup play out, I think Auburn gets revenge.

While it’s difficult to bet against Jameis Winston in a big game, especially with the immense amount of talent around him, the fact that the Seminoles struggle to hold on to the ball is concerning. With 2.3 giveaways per contest, they are 119th in the country out of 128 teams.

The Seminoles have survived the turnovers thus far, but they won’t against Auburn, a team that not only excels in forcing mistakes (2.2 takeaways per game) but also can turn them into points fairly easily with a thoroughly explosive offense. Auburn is third in the nation in yards per play. Oregon is fourth. Both teams have shown the ability to efficiently and quickly march the ball down the field in a variety of ways.

Ultimately, this one would come down to the running game and which team is better able to control the clock.

Who wins the national title if these are the final four teams?

Who wins the national title if these are the final four teams?

The advantage in that department goes to Auburn. Each team is equally capable of running the ball, but the Tigers have been much better defensively. They rank 28th in yards per rush allowed, while the Ducks are 56th.

Still, with road trips to Georgia and Alabama left on the schedule, Auburn has a whole lot of work just to keep its spot in the playoffs.