The Buffalo Bulls have lost three straight games and are still looking for their first road win of the season. Buffalo is a team that relies heavily on its passing game led by Joe Licata, who is completing 64.6 percent of his passes for 20 touchdowns and nine interceptions. Licata has five touchdowns and four picks in his last two games, and Buffalo has 21 passing plays of 25 or more yards. Ron Willoughby and Devon Hughes have combined for more than 900 receiving yards and 11 touchdowns, while Matt Weiser has caught a touchdown in two of his last three games. Buffalo’s ground game is averaging 4.2 yards per carry and Anthone Taylor leads the way with 951 yards and nine touchdowns. However, Taylor has not scored in his last two games. Defensively, the Buffalo Bulls are allowing 33.1 points, 428.4 yards, and they’ve forced 11 turnovers and 17 sacks. Lee Skinner leads Buffalo with 69 tackles and Adam Redden has 12 tackles for loss. 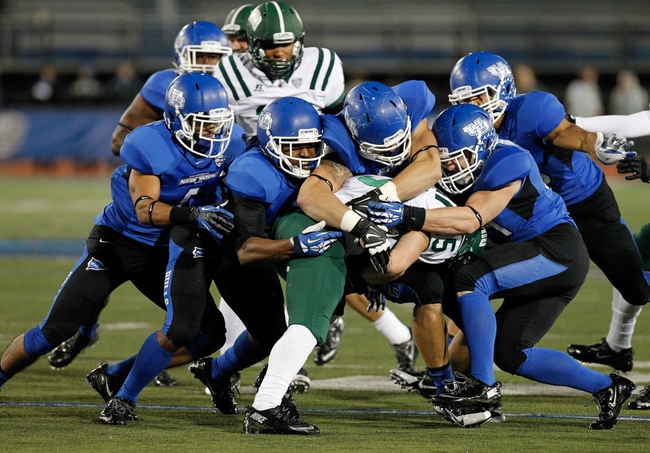 The Ohio Bobcats have lost three of their last four games and look to win back-to-back home games. Derrius Vick gets the nod at quarterback, and he’s completing 60.4 percent of his passes for five touchdowns and two interceptions. Vick has thrown a touchdown in his last three games and Ohio has 19 passing plays of 25 or more yards. While the big passing plays are limited, Chase Cochran and Sebastian Smith have combined for more than 600 receiving yards and three touchdowns, while Jordan Reid has 12 of his 20 receptions in his last three games. Ohio’s ground game is averaging four yards per carry, and A.J. Ouellette and Daz’mond Patterson have combined for more than 700 rushing yards and five touchdowns. Both running backs are considered probable despite injuries. Defensively, the Ohio Bobcats are allowing 26.9 points, 439.6 yards, and they’ve forced 12 turnovers and 17 sacks. Quentin Poling leads Ohio with 62 tackles and Jovon Johnson has eight tackles for loss.

Both of these teams have been so up and down that it’s hard to get a feel for which team is actually going to show up on either side. That’s why I’m taking Buffalo and the points. Buffalo has done a nice job against subpar comp and is capable of moving the ball and putting points up. Don’t be surprised if the Bulls win this game outright.