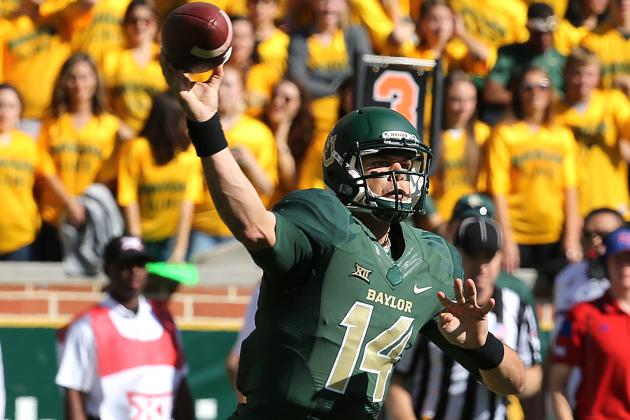 The Oklahoma Sooners will be out for revenge when they host the Baylor Bears in a key Big 12 matchup on Saturday. The Sooners lost 41-12 at Baylor last year and have alternated wins and losses in their past five games, snapping a three-game skid against the spread with a 59-14 victory at Iowa State last week as 15.5-point favorites.

Why the Baylor Bears can cover the spread

The Bears covered the spread in last year’s meeting as 16.5-point home chalk and find themselves as underdogs this time around despite the fact they are in similar positions. The only difference is that last season Baylor was unbeaten going into the Oklahoma game and this year the team has one loss.

The Sooners may be a slightly better team than the one the Bears crushed in 2013, but they are still below them in the College Football Playoff rankings. Baylor still controls its own destiny to some degree with a matchup against Kansas State in the regular-season finale, so beating Oklahoma again here could put the Bears in position to make the four-team playoff if they win out.

Why the Oklahoma Sooners can cover the spread

The Sooners have won 21 of the last 23 meetings with Baylor but both losses during that stretch have taken place in the past three years. Oklahoma is coming off one of its best games of the season against the Cyclones, with quarterback Trevor Knight throwing for 230 yards and two touchdowns, as well as running for 146 yards and three more scores.

Knight was not the starting signal-caller last year against the Bears, instead it was Blake Bell, who is now a tight end for the Sooners and struggled mightily with just 150 passing yards, one touchdown and two interceptions. Knight has thrown for more than 300 yards in Oklahoma’s last two home games and will be the X-factor here.

Baylor is 3-1 straight-up and ATS in its last four road games and 5-2 SU in its past seven games away from home against Big 12 opponents. Combine that with the Sooners going 3-7 vs. the line in their last 10 home games against conference foes, and the Bears look like an attractive play.

Oklahoma’s defense will obviously face a big test in trying to stop Baylor, which West Virginia somehow managed to do three weeks ago in a 41-27 upset at home as an eight-point underdog. However, the Bears are 7-1 ATS in their last eight trips to Norman and should be able to pull off the upset as a road dog.

All point spread and lines data courtesy of Odds Shark, all quotes gathered firsthand unless otherwise noted. Check out Twitter for injury and line movement updates and get the free odds tracker app.