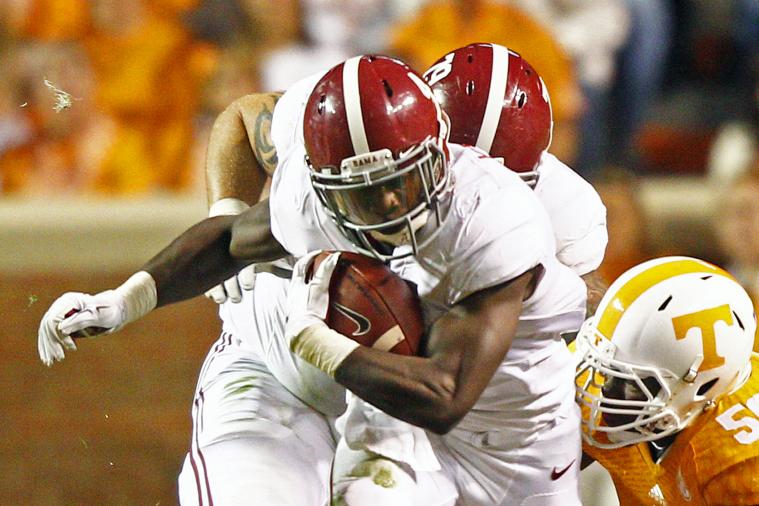 The Alabama Crimson Tide and the LSU Tigers will both be looking for their fourth straight wins when they meet Saturday night in Baton Rouge. Alabama has won the last three meetings with LSU, including the last one at Tiger Stadium 21-17 two years ago, but it did not cover the spread as a 7.5-point road favorite. In fact, the Crimson Tide have also failed to cover their last five games overall as road chalk.

Why the Alabama Crimson Tide can cover the spread

This is crunch time for Alabama, especially with the College Football Playoff rankings initially showing the team outside the top four at No. 6. The Crimson Tide have to be disappointed with that ranking but still have plenty of time to do something about it.

This is a must-win game for them though, especially considering Mississippi State has already beaten the Tigers on their home field. Alabama had a week off to get ready for LSU and has proven itself when needed this season.

When critics complained that the Tide did not score enough after a 14-13 win over Arkansas on October 11, they rolled Texas A&M 59-0 the following week. Alabama is very dangerous when motivated.

Why the LSU Tigers can cover the spread

The Tigers are 3-0 against the spread (ATS) in their last three games as home underdogs and have won 19 of their past 21 home games overall. However, one of those two losses came against the Crimson Tide. This is a young LSU team that has continued to grow as the season has progressed, covering the spread in each of the games during its winning streak. That includes a 10-7 victory against Ole Miss two weeks ago as a 3.5-point home underdog.

The Tigers are also coming off a bye week and know how important this game is even if they are already out of the running for the four-team playoff. They would love nothing more than to end Alabama’s shot at a national championship.

The point spread is exactly where it should be for this game, with the Crimson Tide favored by nearly a touchdown. Alabama has covered just two of the last five meetings, with three of them decided by four points or less. But the two the Tide did cover were blowouts, including a 38-17 victory last season as a 14-point home favorite.

LSU has outscored its last two opponents by a 51-10 margin at home, with the defense really stepping up. The Tigers will need to play their best game defensively to hang with Alabama, so expect a maximum effort here if they do not end up with the win.

The under is 3-0-1 in the last four meetings and 3-0-1 in LSU’s last four games as a home underdog, and those trends should continue here in a low-scoring game.

All point spread and lines data courtesy of Odds Shark; all quotes gathered firsthand unless otherwise noted. Check out Twitter for injury and line-movement updates, and get the free odds tracker app.