You are here: Home / Baseball / Report: Joe Maddon made Rays an offer to stay before taking Cubs job

Report: Joe Maddon made Rays an offer to stay before taking Cubs job 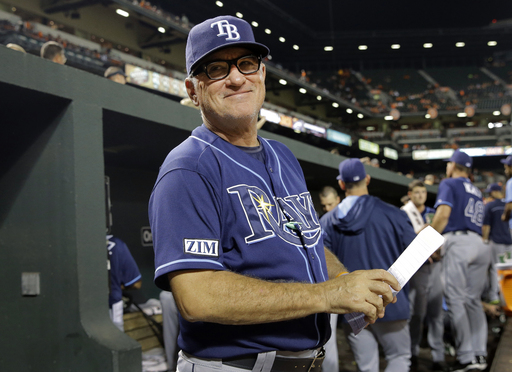 The Chicago Cubs made it officially official Monday, announcing that they’re giving Joe Maddon a five-year contract to be their new manager.

Before that deal was sealed though, according to a new report from CBS Sports’ Jon Heyman, Maddon made the Tampa Bay Rays an offer to remain their manager.

It’s another indication that the upheaval in Tampa was all about Maddon doing things on his own terms. In this case, he reportedly told the Rays how much he wanted to be paid, knowing he could get more elsewhere if they flinched.

Maddon gave the Rays his terms — an “olive branch” from a “get-along guy,” according to Heyman— and the Rays said no. So Maddon took the Cubs job, where he’ll now get paid more than he would have accepted from the Rays. Reports say he’s getting $25 million for those five years, which ranks him right next on his mentor Mike Scioscia as the highest-paid manager in MLB.

Maddon, following what one person described as talks that turned “contentious” after his decision to opt out of his under-market Rays deal, in his personal effort to try to keep things together reached out to the Rays with his own firm proposal. Maddon, ultimately known as a “get-along guy,” was looking to extend an olive branch after nine fruitful years in Tampa Bay with his offer, which was turned down by the Rays, according to people familiar with the talks.

The Rays, said in a statement by Rays owner Stu Sternberg to have “diligently and aggressively” pursued Maddon, are believed to have offered via a multiyear extension, a significant raise by their standards at least, from his approximate $1.8-million salary Maddon was to make from them in 2015. But ultimately, Tampa Bay’s offer is still thought to have been well below market value, or at least what the Cubs were willing to pay for what they viewed as an “elite” manager. Or what Maddon was willing to stay for.

The Rays are thought willing to have offered close to $3 million annually on the extension, but ultimately they were probably hurt by small-market limitations.

There’s still another contentious part of Maddon’s departure from the Rays. The club is contemplating tampering charges against the Cubs, but Maddon’s agent Alan Nero told MLB Network Radio that no such tampering occurred. He also said Maddon would have stayed in Tampa for “under market value.”

Alan Nero said he negotiated 5-6 days w/ Rays re:Joe Maddon before opting out. He was willing to stay @Rays for MUCH less @MLBNetworkRadio

The Rays, of course, might have a very different summary of the events that led to Maddon’s jumping to Chicago. You have to figure Maddon and his agent knew what kind of budget the Rays were working with, thus they probably had a good idea whether the Rays would accept the “olive branch.”

The narrative of Cash-Grabbing Joe Maddon won’t last that much longer anyway. Soon enough, the Rays will be a memory and he’ll have to produce in Chicago, a city starved for a Cubs championship with an exciting young talent pool that’s fit to be molded.