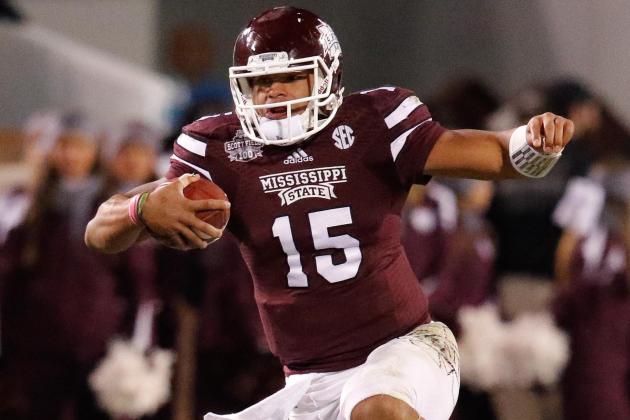 Just one Top 10 team fell in Week 10, but it was enough to likely knock that program out of the playoff picture. No. 4 Ole Miss came up short against SEC-rival Auburn at home, leaving the door open for another team to creep into the top-four discussion.

The Rebels’ slide might mean big things for No. 5 Oregon in the College Football Playoff committee’s rankings. But with several weeks remaining in the season, what did Week 10 of the college football season tell us about how the playoff will shape up?

Can the Ducks rout opponents the rest of the way? Will the SEC West keep two teams in the playoff? What do we make of Florida State barely escaping Louisville with a win on Thursday night?

All of those questions and more will be answered the rest of the way. For now, here’s a look at predictions for who will make the semifinals.

Not much has changed in my mind about who the top four teams will be at the end of the year. In fact, Mississippi State and Ole Miss’ performances made the projections look even better.

The Bulldogs will likely remain the No. 1 team in the country thanks to their win over Arkansas. However, the close margin of victory proved they aren’t as mighty as once perceived in the SEC. Chase Goodbread of NFL.com shared his thoughts on Dak Prescott and Mississippi State as a whole:

Prescott, a leading candidate for the Heisman Trophy, threw for a career-high 331 yards on 18 of 27 passing, but also threw a pair of interceptions—his fourth and fifth over the last three games—to help keep the Razorbacks in the game until late in the fourth quarter.

But it was Mississippi State that scored 17 straight points for the win, and Prescott who found Fred Ross for a 69-yard touchdown pass for the game-winning points in the fourth quarter.

Mississippi State wasn’t the only top team to scuffle in Week 10, as Florida State narrowly pulled out a win. The Seminoles needed a late charge in the first half and an outburst in the third and fourth quarters to remain undefeated.

That also sparked some comments from Jameis Winston about the makeup of the team, per ESPN:

Just one more true test remains for the Noles against Miami on Nov. 15, who is currently riding a three-game winning streak. Pass that test and another rivalry game against Florida, and FSU will be competing for another championship in January.

One program that continues to roll is Oregon after a midseason loss to Arizona. A 29-point win over Stanford should be enough to move the Ducks into the top four in the playoff committee rankings.

Much like Prescott and Winston propelling their teams to great seasons, Marcus Mariota continues to excel for Oregon. Dane Brugler of CBS Sports provided a look at his astounding career statistics:

The final team projected in the playoff is one of the only teams not to make any noise this week. With a bye, Alabama actually got some help from Auburn in the win over Ole Miss.

Ralph D. Russo of The Associated Press points out exactly what the Crimson Tide need to make the playoff:

Having a ridiculous schedule ahead, winning out is not at all guaranteed. But with contests against Mississippi State and Auburn at home, coming away with those victories might be enough to boost Bama to the No. 2 spot in the playoff.

If they can continue their winning ways, the Tide will be one to watch in the postseason. Potentially going against an Oregon offense clicking on all cylinders, nothing will be easy for the Tide or any other team in the final four.